All of these features are influenced by culture, and cultural differences can hinder communication and even make it impossible in the translation process. Translation can be viewed in terms of an acceptable way of communication between representatives of different cultures and languages. It should be borne in mind that there are two methods of translation – transformation and component analysis. 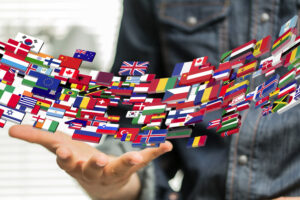 Communication in any society has always been of great importance. Since the time of our cave ancestors, it has been carried out in a variety of ways. Neanderthals painted on the walls of caves, Indians signaled to each other with drums and smoke. The military sent secret messages by pigeon mail. Letters and telephone numbers appeared already at the next stages of communication. And in our time, the Internet is becoming the main method of communication.

Culture is a collection of beliefs, ideas, points of view, traditions, ways of behaving, celebrations, culinary preferences and styles of dress, which are different in each country. People living in the same country have some similarities within their culture, but a closer look reveals differences. Indicative in this respect are concepts such as “working class culture”, “high culture”, “low culture”. The culture of any country changes over time. Consider, for example, how Iranian women dressed during the Qajar period. Today their vestments look very different. A person who finds himself in a different cultural environment does not change his own culture. Hence, intercultural communication requires discretion.

When multilingual people communicate, a certain common language is needed that would help them understand each other. In such cases, translation is a possible way of communicating. The translation process is like driving a car, which needs a good driver to move in the right direction. A translator who speaks not only both languages, but also knows both cultures, is not only “bilingual”, but also “bicultural”. An interpreter’s strategy can be compared to following road signs. Analyzing cultural elements before performing a translation is just as important for the translator as it is for the driver, say, checking the oil and antifreeze level before driving.

Translation as a mediation in intercultural communication
Translation is an act not only linguistic, but also cultural, an act of communication on the border of cultures. The translation process always has two aspects – language and culture, since they are inseparable. Language and culture are interconnected: language not only expresses cultural reality, but also gives it form. The meaning of a linguistic element is clear only when it is consistent with the cultural context in which it is used. Translators should pay great attention to differences in quality and degree of conventionality when translating text from one culture to another. One of the main characteristics of a translation is the “double bind situation”, when the translator has to connect the cultural context of the source text and the cultural and communicative characteristics of the translated text (House, 2009). What is the practical solution to performing a successful translation in terms of intercultural communication?

Component analysis is the decomposition of lexical units into semantic components in a ratio of one to two, three or four (Newmark, 1988). The component analysis method eliminates the cultural aspect by emphasizing the meaning of the message. It does not reproduce the pragmatic potential of the original and lacks a practical component (Ketabi & Ordudari, 2008).

Which method is most acceptable for full-fledged translation in intercultural communication – transformation or component analysis? Frankly, there is no clear answer. Newmark believes that the choice depends, firstly, on the type of text, secondly, on the requirements of the addressee or customer, who may be indifferent to certain characteristics of the text, and, thirdly, on how important specific cultural terms are in this case. … The researcher also believes that the translation should be adapted for reading in the target language, even if the original text is not intended for the reader at all, but only for the author himself.

House believes that the local situational context should provide answers to the questions: by whom, when and why the text was written, who will read it and for what purpose? All these questions will help you understand how a particular text is written, interpreted, translated and read. The situational context is itself part of the larger cultural world. A translator who manages to find the correct answers to these questions successfully solves all problems arising in intercultural communication.

A few words about the adequacy of the translation
Translation is the process of replacing text in one language with text in another language. Text is not a simple collection of elements: the words and sentences that we use in the process of communication can have different meanings if we change their combinations. Therefore, it is necessary to translate the text as a whole, and not in separate sentences and words. When translating a communicative text, it is necessary to preserve its cultural characteristics. To achieve the adequacy of the translation, the linguist must be familiar with the culture of both the source language and the target language, know the purpose of communication and the target audience. It must be remembered that due to the difference in culture and language, there cannot be an exact translation. The only thing that can be hoped for is approximation. The greater the similarity between the systems and cultures of two languages, the more productive translation will be in intercultural communication.