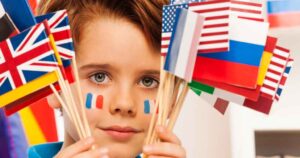 In the modern world, knowledge of foreign languages ​​among children has also not lost its relevance. Many preschool educational institutions offer foreign language learning services for children from the age of 3. It is during this period that the formation of the correct speech of the child takes place. Therefore, when mastering the native language of the child, it will be effective to introduce the study of an additional language.

A large number of scientists are engaged in the methodology of teaching early education of children in foreign languages. Their opinion regarding the definition of the age from which one should understand the early learning of a foreign language was divided into 2 groups. The former believe that the education of children should be taken from the preschool period, since it is carried out on an intuitive-practical approach, starting from the birth of a child, ending by 6-7 years (the moment they enter school). The second group of scientists suggests that early education is the education of children of primary school age (primary secondary education). And they share: early preschool education is carried out before the child enters school – 4-7 years old, early school education is a period of study in grades 1-4.

Each age has its own advantages. Also, for each child, the age that is favorable and effective for learning foreign languages ​​is different. It is necessary to individually approach this issue of training.

Language memory can be singled out as a significant component for evaluating the criterion of early learning methodology. It is she who helps to replenish the vocabulary, master the construction of sentences, translate words and develop speech abilities.

The beginning of teaching foreign languages.
The main criteria for learning a foreign language at an early age is the physiological and psychological readiness of the child: the formation of conscious perception, observation, perseverance, attention, visual and auditory memory, the ability to listen and hear, logical thinking.

Methods of teaching a foreign language.
The increased interest of parents in learning a foreign language for children has led to the fact that language learning begins in preschool educational institutions (kindergartens). Due to the psychological characteristics of age, there is a rapid memorization of information, language turns, an increase in the vocabulary. All this affects speech abilities (even the native language), the horizons expand, and the stability of attention increases.

When teaching children, visualization and play are important. This helps to avoid tiredness and fatigue. The learning process should be such that children switch voluntary attention to involuntary.

Teaching foreign languages ​​at an early stage.
When teaching children in preschool organizations, it is better to study in groups of 5-8 people, it will be especially good if the children already know each other. Classes in duration should not exceed 20-25 minutes for children 5-6 years old.

It is necessary to change the type of learning activity throughout the lesson. Games, dancing, exercising, singing, viewing pictures and movies – all this must be replaced periodically. The frequency of classes is at least 2-3 times a week. Fewer classes are completely ineffective. They may forget material without repetition and reinforcement.

The basis of the method of teaching the language to children is the game. It is she who should be throughout the entire training in different forms: for example, imaginary situations between a teacher and a student.